The Family Behind the Brand

Bar A Cattle Co., Schulenburg, Texas, started when Dave and Becky Allan got married, but the Bar A brand came from Mary and Dale Barber when Dave worked for Barber Ranch. Dave’s love for this industry started at an early age as he grew up in Nebraska showing Herefords and being very active in the Nebraska Junior Hereford Association having served as president in 1988.

Dave and his brother, Mark,  started showing Herefords in in 1977. His first job after graduating from high school  was working for Kevin Jensen, of Jensen Fitting Service, hauling 30-40 head to all the national shows around the country. In the early 90’s, he also worked for Adams Bros and Co. where he had two champion hereford bulls, one champion female and two champion carloads in Denver at the National Western, in three years. During that time he judged on the livestock team for Texas A&M University and then went on to graduate school at Michigan State University where he was the assistant livestock judging coach.

After college Dave moved to Dunlap Iowa to work for John Sullivan and manage Sullivan Limousin with his brother Mark.   During this time he met his wife, Becky. Becky had just graduated from Texas A&M in Ag Development and she was working in Austin for Abbott Labs. Becky grew up as a military brat and lived in England, Australia, California , Virginia, Texas and Italy. The cattle business was a whole new world to her.

In 1999 they decided to move back to Texas where Dave did consulting and then eventually  managed a stocker operation for several years in Schulenburg.  In 2001 Dave and Becky started raising show steers and heifers. There were many successes in the club calf business, including raising the champion and reserve overall in Houston and the champion steer at OYE in Oklahoma City..

From an early age, Dave loved evaluating and breeding cattle, his vast experiences in different breeds and facets of industry led him to a real interest in judging cattle. He is fortunate to have judged all across the country from the green chips in Louisville, many shows at the National Western and most recently the Hoosier Beef Congress in Indiana. Some of his most memorable judging experiences have included judging with the late Bill Couch, and judging the Hereford and Angus Shows in Denver with his brother, Mark.

Becky’s passion has always been marketing and helping others create brand awareness and that led her to starting The Brand Company in 2001 doing promotional products for businesses and associations. She has been working with breed associations such as the American Hereford Association and the American Maine-Anjou Association well as many other agriculture businesses, farms and ranches with a focus on  apparel and promotional products.

Dave and Becky have three boys, Tyler, Mason and Landry. Once the boys were old enough to show, they decided that the Hereford breed and the National Jr Hereford Association was where they wanted to be involved. The National Junior Hereford program is second to none and they feel very lucky that their kids are able to be involved in events such as the Faces of Leadership Conference and the Junior National Hereford Expo.

Tyler has had many successes, including winning all four age division in showmanship at the Junior National Hereford Expo. One of the proudest moments for the Allan family came this past year when both Tyler and Mason won senior and intermediate showmanship. This years junior national was one to remember having two division champions, two reserve division champions and overall reserve champion heifer .

The Allan boys are very active and have seen much success in and out of the showring.  Tyler is now a freshman at Texas Tech majoring in animal science, Mason is a freshman in high school, plays basketball and baseball and really enjoys livestock judging, Landry, well he does a little bit of everything and keeps everyone laughing. Landry will start showing next year.

As a result of all the Hereford involvement,  in 2012 Bar A decided to sell the club calf part of the business in an effort to expand the Hereford operation. Around this same time, the idea for GeneSource was born and Dave and Becky started down the path of marketing semen, which has been a great edition to the marketing mix at Bar A. Genesource is a multi breed semen distribution company.  Dave enjoys talking with cattlemen around the country, whether it be the bull owners or the semen customers about their operations and what’s working for them.

The Allan’s said they feel blessed with all the success they have had, be it with customers cattle or Tyler and Mason’s projects, but the biggest blessing is all the time they have gotten to spend with the other families who have become their best friends. 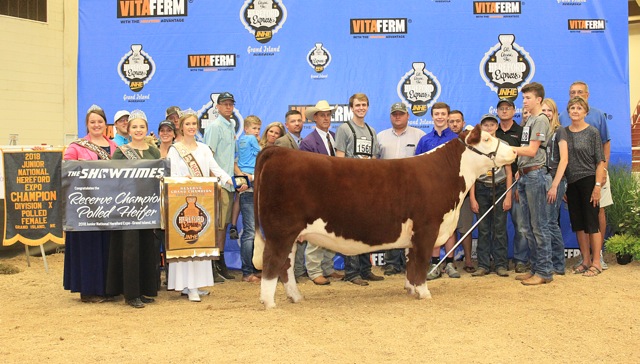